We lost our dog Benny last week. Not my dog, really, not anymore, but the last dog we got when I was still somewhat living at home. The silly, neurotic dog that sat on my feet day after day as I prepped application after application when I came home from college. The dog that had to do three counter-clockwise circles and army crawl under the dining room table every time he went from the kitchen to the front door. He was old, and skinny, and sick on regular basis the last few months and then, finally, he was done.

I’ve been thinking about him a lot this last week, particularly about my beginning with Benny. I was in California for the summer when he was born in our basement, part of Riley’s only litter. I almost missed him entirely, but his two littermates picked on him so much and so often that my parents kept him with them, separated from the other puppies for his own protection. By the end of the summer, they were so attached they couldn’t give him up. My mother had told me that the puppies had been taken away by the breeder, and I was disappointed to miss them entirely. 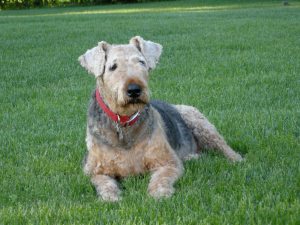 I flew back to Wisconsin on a red-eye flight, the morning of my grandmother’s funeral. I stumbled up the front-steps, bleary-eyed in every way possible, opened our front door, and pretty much tripped over him as he bounded outside.

New puppies are a marvelous distraction.

My story with Benny has a clean beginning, and a slow, unwinding end. I’ve been thinking about that, and how easy and difficult it is to write about beginnings and endings like that. Sometimes beginnings creep up so gradually you don’t know where to start. With my grandmother, for instance–where would I begin that story? Endings are, usually, much easier. Often there’s a definite finish.

One common problem that writers face is starting too early. Introductions drag on and on. Or a novel opens with a character’s entire back story, instead starting with the beginning of the story itself. (For this reason, I love Kate Atkinson’s “I am conceived!” beginning of Behind the Scenes at the Museum. You can only get away with this on purpose.)

How do we know where to begin? I think it’s part of the problem I’m having getting this blog going–I keep wanting all the support pages, the About Me and Links and other decorations to be in place before I start the conversation. I want the timing to be perfect, so I have time to think and write and edit everyday. But, obviously, that will never happen. Life always happens. There’s always going to be something.

This week, my dog died. But I’m going to try to begin here anyway.